Description of the system:


The neuron, or the nerve cell, is a highly specialized cell that communicates information in electrical and chemical forms. The neuron is composed of:
• Nucleus – contains chromosomes
• Dendrites – receive information from other neurons and sensory receptors
• Cell body – processes nutrients and provides energy for neuron
• Myelin sheath – insulates axon and increases communication speed
• Axon – carries information to other neurons, muscles, and glands
• Nodes of Ranvier – gaps in the myelin sheath
(Compliments of Reed , Gabby, and Danielle) 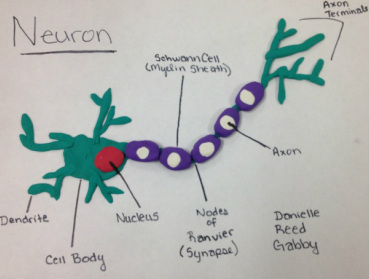 Nerves are responsible for sending electrochemical signals to and from the brain and other parts of the body. There are four main types of nerves:
-Cranial Nerves (sensory organs to the brain)
-Central Nerves (withing brain and spinal cord)
-Peripheral Nerves (limbs to spinal cord)
-Autonomic (brain/spinal cord to organs)
The nerve is made up of the neuron which is the nerve cell. Without the nerves, nerve signals, or action potentials, would not reach the brain and not only nerve damage would occur, but damage to other parts of the body as well.
(Compliments of Carmelita, Cailin, and Julia) 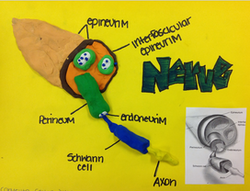 Central Nervous System
The central nervous system is the processing center for the nervous system. It receives information from and sends information to the peripheral nervous system. The two main organs of the CNS are the brain and spinal cord. The brain processes and interprets sensory information sent from the spinal cord. Both the brain and spinal cord are protected by three layers of tissue called the meninges. Inside this is a system of hollow cavities called ventricles. The ventricles are filled with cerebrospinal fluid located within the ventricles called the choroid plexus. Cerebrospinal fluid surrounds, cushions, and protects the brain and spinal cord from trauma. It also assists in the circulation of nutrients to the brain. The brain is the control center of the body. It consists of three main components: the forebrain, the brainstem, and the hindbrain. The forebrain is responsible for a variety of functions including receiving and processing sensory information, thinking, perceiving, producing and understanding language, and controlling motor function. It also contains the largest part of the brain, the cerebrum. Most of the actual information processing in the brain takes place in the cerebral cortex. The midbrain and the hindbrain together make up the brain stem. The midbrain is the portion of the brainstem that connects the hindbrain and the forebrain. This region of the brain is involved in auditory and visual responses and motor functions. The hindbrain extends from the spinal cord and contains structures such as the pons and cerebellum. The hindbrain also contains the medulla oblongata which is responsible for controlling such autonomic functions as breathing, heart rate, and digestion. The spinal cord is a cylindrical shaped bundle of nerve fibers that is connected to the brain. Spinal cord nerves transmit information from body organs and external stimuli to the brain and send information from the brain to other areas of the body. Neurons are the basic unit of the nervous system. All cells of the nervous system are comprised of neurons.
(Complements of Mac, Cassandra, and Tori)

The Peripheral Nervous System
The peripheral nervous system contains some voluntary nerves that carry instructions from your brain to your limbs. Any information that is gained from your senses is then sent back to your brain. Some of the functions of PNS include coordinating body movements and sensing danger. Two of the major nerves that make up the the PNS are the cranial and spinal nerves. The cranial nerves sprout out from the brain where as the spinal nerves come out from the spinal cord.
(Complements of Tahrea, Wilneydi, and Sharon) 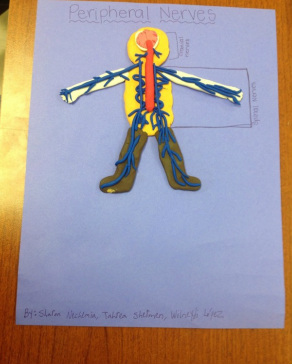 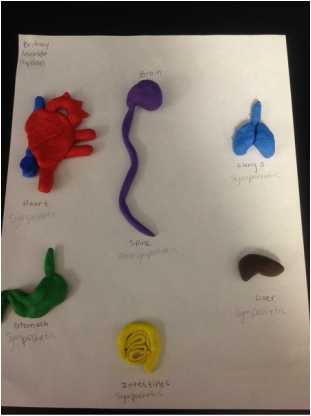